Jairam Reddy makes contact with the ball during his at bat as bowler Humayun Bashir, from left, catcher Moghli Umatiya, referee Basit Zubair and Karthik Patel look on during a Central Texas Cricket League match in Round Rock, Texas on March 21, 2021. Thomas Fitch/Reporting Texas

On a sunny Saturday in February, 22 men were playing the sport of cricket in Old Settlers Park in Round Rock.  A shiny white leather ball with green stitches cracked through the air. The Amps were batting, and the Lions were in the field.

Cricket, a team sport using a bat and hard ball, is thriving in Central Texas. Immigration from countries where cricket is popular, such as Pakistan, India, Bangladesh, Sri Lanka and South Africa, has fueled the rise of the sport.

The number of cricketers in the United States is increasing, with up to 14,000 members in USA Cricket, the national governing body. Its increased popularity has led to conversation about cricket being a part of the Los Angeles Olympics in 2028.

There are several leagues in the area. The two biggest are the 18-team Central Texas Cricket League,  which includes the Amps and Lions and started in 2002, and the Austin Premier Cricket League, with 12 teams, which was formed in 2017. The Risers warm up after a break in the action against the Incredibles at the Williamson County Cricket Fields, in Leander, Texas, on March 6, 2021. Thomas Fitch/Reporting Texas

On the Saturday in February, Sandeep Gowda, 29, stepped out of the crease line — the defined area by the wicket within which the batsman operates and swings his bat. Swish and pop! The ball flew in the air. Gowda dashed to the other wicket 22 feet away wearing helmet, gloves and leg guards. His teammate ran towards him with his protective equipment to take Gowda’s place. The two batsmen passed each other, but the ball was caught before it touched the ground.

“Catch out!” The umpire said with a raised index finger and arm straight up. A supporter shouted “Shabash!” or “well done” in Urdu.

“There is a lot of calculation about the runs, wickets and potential of the next batsman,” Gowda said. “Cricket gives me happiness, I stop thinking about everything else in the world, it’s all fun and I enjoy it,” he said. Bharadwaj, who goes by one name, bowls against the Amps as the Tigers’ Humayun Bashir, left, looks on during a Central Texas Cricket League game in Round Rock, Texas on March 21, 2021. Thomas Fitch/Reporting Texas

The story of cricket in Old Settlers Park dates to 1997, when Nasiruddin Momin, a local businessman with a passion for cricket, drove around the park looking for a field that could potentially work.

“I paid out of my pocket to promote cricket,” Momin, who is now 56, said. “I asked Round Rock Parks and Recreation about a field in the park and explained what I wanted,” he said. Round Rock Parks and Recreation paid attention and put in a concrete pitch and chalked out the boundaries. That became the first cricket ground in the Greater Austin area. The Lions and the Amps play a Central Texas Cricket League match on March 21, 2021, at Round Rock, Texas’ Old Settlers Park, the site of the first cricket ground in the Greater Austin, Texas area. The Amps won the match. Thomas Fitch/Reporting Texas

Humayun Bashir, who was born in Pakistan and moved to the U.S. in 1999 for work, is a board member of Central Texas Cricket League. Bashir, 46, has been playing with Momin’s Round Rock Cricket Club since 2004, when about 123,000 foreign-born immigrants lived in Austin. In 2019, the number had shot up to more than 190,000, City Demographer Lila Valencia said in an email. Amps team members cheer a teammate’s good bat during a Central Texas Cricket League match in Round Rock, Texas, on March 21, 2021. The sport has gained in popularity as more immigrants from countries where cricket is popular settle in Central Texas. Thomas Fitch/Reporting Texas

“The Round Rock Cricket Club had four teams when I joined,” Bashir said. “Now we have three active hard ball clubs in Austin with more than 25 teams playing,” he said. When he started playing in 2004, the cricket ground in Old Settlers Park was not in good shape. Following a pivotal bowl-out, similar to a strikeout in baseball, Jairam Reddy lays on the ground and covers his face during a Central Texas Cricket League match in Round Rock, Texas, on March 21, 2021. Thomas Fitch/Reporting Texas

“In 2014, the City of Round Rock redesigned the cricket field, installed new grass and irrigation system and a new pitch for our club,” he said.

“For us it was about diversity and reflection of all people in our community,” Atkins said. “If the need shows we need another [cricket ground] we will work with the group,” he said.

Brian Walters, 53, works on  youth development for USA Cricket.  Originally from Jamaica, Walters has lived in Austin since 2004 and played in the Central Texas Cricket league before retiring from the sport in 2018. “Austin is a multicultural city that has attracted individuals from the world over, and that includes a fair number of people from the Asian subcontinent, for whom cricket is a passion,” Walter said.

Pravin Hegde, 39, played cricket in India before moving to Austin in 2013 for work. Hegde played for his state Under 16 and Under19 teams, he said. With a high-pressure executive position in sales in the tech industry, playing cricket on the weekend helps him relax and network, Hegde said. When his car broke down, his cricket buddies in Austin Premier Cricket League told him where to get it fixed.

“If you’re upset after a bad day or you want to celebrate after a good week,  it’s always good to go to the cricket ground and kind of let your frustrations out in a different way,” Hegde said.

Cricket does the same for Shahiq Memon, 21, a junior at the University of Texas at Austin from Houston.

“Playing cricket brings the best out in me because I am focused on one thing and all my worries about school and work go away,” Memon said. For Sanjay Saksena, 55, cricket is a way of life, he said.

Saksena is the communications director and a board member of the Hill Country Cricket Association. Sakensa is also a founding member of the Austin Premier Cricket League.

He moved to Austin in 1997 and started playing at  Chisholm Trail Middle School in Round Rock. ‘We had flattened 22 yards and we used to put a carpet or a jute mat” for the pitch, Saksena said. “We mostly were Indians, a few Britishers, a couple of Pakistanis, South Africans, Bangladeshis and Australians.”

During his time in Austin, HCCA has grown as a club, with its own leased cricket ground in Williamson County and more teams. For Saksena, the growth has also been personal.

“I have taken a lot of lessons from cricket and applied in my life; I delegate work, am able to count on people, and trust in their ability to execute a task,” he said. “I apply these in my personal and professional life.”

For more cricket photos, click on the slideshow below: 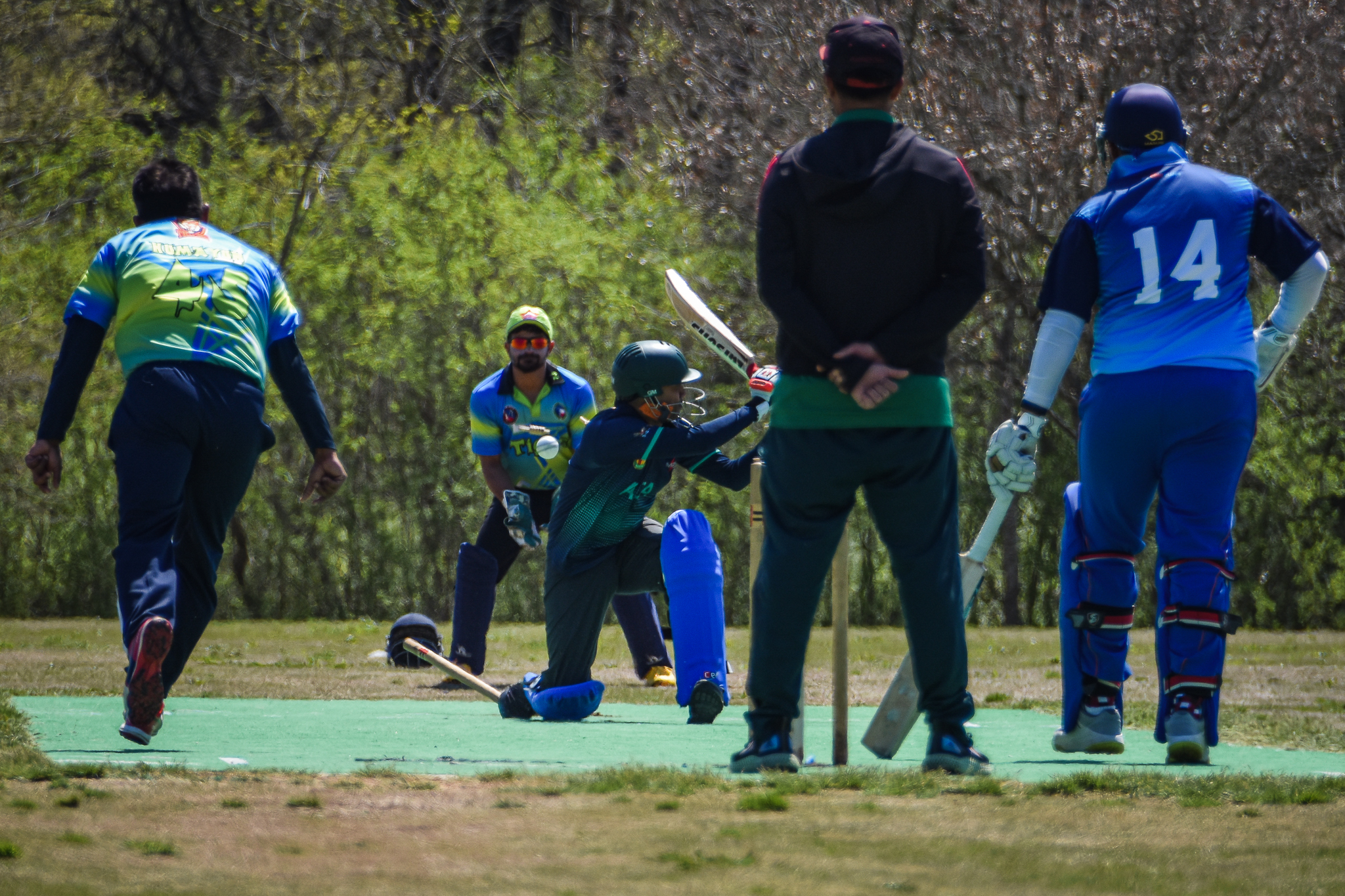